On the bus back home to Cardiff after a few busy days at Cloud Native London!

Last week I took a visit to London to attend a tech conference called Cloud Native London 2019 to learn more about the state of Cloud Native Development; Including the tools that are being developed by the community and how different organisations are implementing such tools into their work flows.

As you can see from the below image, I’ve got an absurd amount of notes which I noted down during my time watching tracks and keynotes from speakers. 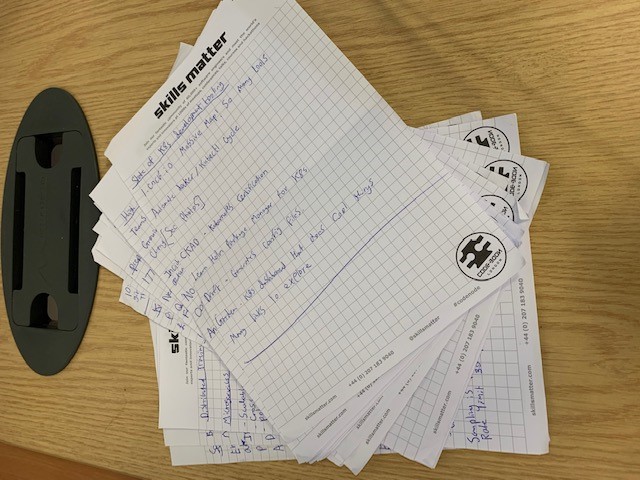 In this post I’ve summarised these notes as part of a joint effort to digitise them and to share knowledge with others.

All of the keynotes were recorded and are watchable on the SkillsMatter website for as long as the site exists. I would embed each recording here but it appears these videos are hidden behind a login so I won’t share them just in case this is against the SkillsMatter terms of use.

Start of Cloud Native London 2019: As I was in work on Tuesday, I arrived in London at 7pm on Tuesday evening, caught up on some emails and then went to bed. My accommodation was only a 15 minute Tube journey from CodeNode London,

Before and After Kubernetes - Was It Worth It and Why? A joint case study Alexis Richardson

Lightning Talk: How to Explain Docker to Your Grandma Francesco Renzi

Keynote: Learning To Be Successful at “Being Wrong”™ In The Cloud Russ Miles

Istio service mesh vs AWS App Mesh: how about both? Christian Posta

Lightning Talk: Discovery, Consul and Inversion of Control for the infrastructure Pierre Souchay

How We Broke the World Record for Computing Digits of Pi (31.4 trillion!) Emma Haruka Iwao

Serverless 2.0: Get Started With The PLONK Stack Alex Ellis

Keynote: Quality for ‘Cloud Natives’: What Changes When Your Systems Are Complex And Distributed? Sarah Wells

Proudly working at the NHS to enhance their I.T systems with the aim of improving health-care across Wales.

Got questions? Want to tell me something? Looking for advice?